Beethoven’s Back, Selby and Friends ★★★★

Beethoven was confused about his own age for much of his life and may well have rejected the idea that we celebrate his 250th birthday next year, perhaps suggesting we wait until 2022. The final 2019 Selby and Friends concert nevertheless got in early with a program featuring chamber music for strings and piano, a genre in which he was an undoubted innovator. 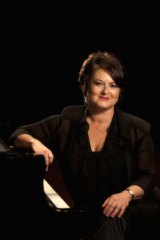 Pianist Kathryn Selby got in early on the Beethoven 250th celebrations.

His last work of this type, the Cello Sonata Opus 102, No. 2 in C major is remarkable for its compressed economy of expression and form. Cellist Richard Narroway approached it with quiet cogency, the ideas understated but well understood. In the shimmering modulation leading into the emphatic second idea of the second movement, I felt he and pianist Kathryn Selby could have emphasised more the momentousness of the shift but this was an intelligent performance nevertheless.

In the Violin Sonata Opus 30, No. 2 in C minor, violinist Andrew Haveron projected with immaculate tonal finish and commanding precision over a wide dynamic and expressive range. Both he and Selby captured the work’s turbulent boldness and played the lyrical slow movement to telling effect.

There was similar commanding breadth in the less-frequently played Piano Trio in E flat, Opus 70, No. 2 after interval. Given his dissatisfaction with performances in his own day, Beethoven may well have appreciated the empathetic ensemble precision of this concert. Just don’t mention his age.

Speaking of age the Brandenburg Orchestra celebrates its 30th anniversary this year (Selby her 31st) and a pause for applause is warranted for their sustained success and broad reach. Telemann’s Concerto for 4 Violins in G major began with an improvised prelude by Matthew Bruce although the exposed texture of four solo parts in the main work revealed intonation and tonal weakness.

The same composer’s Ourverture-Suite in C major, Water Music, was humorously pictorial with a bucolic want of sophistication. In the four concertos of Vivaldi’s Four Seasons Shaun Lee-Chen led evocative bird-calls in the opening concerto Spring and finished Winter with fiery energy. A project for the orchestra’s next phase will be to get to the stage where the use of period instruments is a blessing rather than something for which one has to make allowances.