Share this:
by CityNews
on September 21, 2016
in Arts & Entertainment, Music, Reviews 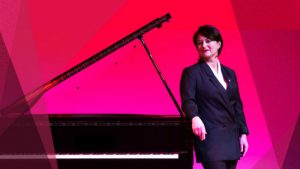 THIS Selby & Friends tour is an all-Beethoven program, with two piano trios bookending a violin sonata and a sonata for cello and piano. Kathryn Selby’s friends on this occasion are violinist Dene Olding, recently retired Concertmaster of the Sydney Symphony Orchestra and cellist Julian Smiles, sometime principal cello with the Australian Chamber Orchestra and, with Olding, a member of the acclaimed Goldner String Quartet.

The program opened with the Piano Trio in G major, Op1, No 2, written in 1794-95 and included in Beethoven’s first published compositions. This was followed by a Sonata for Cello and Piano in C major, Op 102 No.1 from 20 years later. By which time Beethoven was profoundly deaf and writing music that he could only hear in his head. The second half of the program began with the Violin Sonata No 8 in G major, Op.30 no 3 from 1801-02 and concluded with another Piano Trio in D major, Op 70 no 1”Ghost’ from 1808, so called because of the atmospheric effects in the slow second movement.

There is little one can be critical about in a Selby & Friends concert. As with previous concerts I have heard, this is a thoroughly professional and expert performance, well thought out and planned. I enjoy the fact that Kathryn Selby comes onto the stage at the beginning and talks a little about the music, discussing the differences in early nineteenth century pianos and how they reshuffled the concert order after the first night as they considered it worked better musically.

There is also delight in watching three musicians work so well together. Even though this is Selby’s gig, it seems that she is happy to be almost a supporting artist at times and just enjoying working with these two other superb musicians.

All three, and especially Kathryn Selby, look like they are having a good time, and this is communicated to the audience.

It was interesting to see that both Olding and Smiles have eschewed printed music on paper for iPads controlled by wireless foot-operated switches. One imagines that the scrolling speed of the music is pre-set for each movement and started and stoped each time by a foot tap. How long before the old-fashioned music stand, on which the ipad looks a little lonely, gets replaced by a dedicated iPad stand.

Mention must also be made of the program notes . The four works had notes written by different people, which are perhaps licensed in some way. The historical background is always useful and interesting but some of the musicological notes can be a bit silly. An “occasional comic fermata” or ‘using “the nimble rising-4th motive in many, mostly humorous or ironic way”’. I can only imagine these people laugh at very odd things.