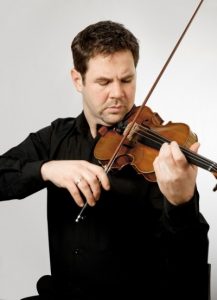 In association with the Sydney Symphony Orchestra’s concertmaster, Andrew Haveron, and the Australian Chamber Orchestra’s principal cello, Timo-Veikko Valve, pianist Kathryn Selby presented a large-framed program on the latest of her subscription series rounds; big music reduced in size to suit a piano trio. As you’d expect with experts like these at work, the readings impressed for their balance and well-achieved realization of the arrangers’ intentions. More unexpectedly, two of the three works performed offered us some rare insights, views of the interstices of well-worn scores and how they achieve their effects in normal form.

Selby began with the Haydn Miracle Symphony No. 96 in D as arranged by J. P. Salomon, the violinist/impresario who brought Haydn to England and did much to ensure his success there.   The arrangement is, as you’d expect, heavy on piano content; indeed, it was rare that Haveron or Valve enjoyed a non-doubled solo line; Selby had responsibility for most of the first violins’ content, and even the odd woodwind outing, like the flute solo at bar 75 of the opening Allegro.  As Haveron pointed out in a post-performance address, the work in this format sounds like an early piano trio in its keyboard-takes-all style, but the content remained symphonic in its directness of address and a quality that, in the context of the later piano trios, sounded like simplicity.

A different experience emerged from young American musician Matt van Brink’s version of Le tombeau de Couperin by Ravel which was originally (to re-state the bleeding obvious) a six-part piano solo suite from which the composer chose four movements to orchestrate Van Brink’s version gave both string players much more to handle and it walked a fine line between over-utilising the original and thereby handing Selby the work on a plate, and sharing more than the dominant melodic lines fairly.

Remarkably, van Brink’s arrangement reflected much of the composer’s orchestration but not slavishly;  some cello lines from Valve took on a sudden startling freshness, moving from other wind instruments into the string player’s domain.  For all that, the most successful movements were the outer Prelude and Rigaudon, the first for the splendid realization of the piece’s benign burbling, the latter for bringing out clearly the spiky harmonic content, especially of the foundation ritornello of this dance.

In some senses, this harmonic clarification proved the most interesting characteristic of this performance.  Where the piano version – or perhaps its interpretation by pianists who should know better – blurs the bright acerbities that leap out at every turn, thanks to the sustaining pedal, and the orchestration also attenuates the sparks because your ear is seduced by the change-ringing of textures that shift from woodwind to strings with a numbing haziness, this piano trio version puts the work’s forward motion in a sharper light; to the point where you are pulled up short by an unfamiliar chord or an unexpectedly stark subsidiary line.

A work well worth hearing, although I’m not convinced that it makes much of an addition to the repertoire of French chamber music, as Valve seemed to be saying in his little address.   But the evening’s final offering was a different matter.  This was Beethoven’s Triple Concerto Op. 56 which has a piano trio at its centre.

I have to confess to a partiality for this concerto above all the others in the composer’s canon.  Many years ago, while I was on a return trip from Amsterdam, the plane’s audio entertainment channel of serious music somehow got stuck on a repeat of this concerto and the Love Scene from Berlioz’s Romeo et Juliette Symphony.  Having nothing better to do – all the books read, all the films seen – I passed several hours in this Beethoven/Berlioz loop and, unlike most forced relationships. wound up with an affection for both.  Suffice to say that, ever since then, live readings of the Triple give rise to an extended anticipatory frisson.

Carl Reinecke, the eminent 19th century teacher and friend of Brahms (among others), cut down Beethoven’s full score so that the three soloists take on all the tutti passages, the subsequent construct a splendid sample of seamless organization.   Certainly, the players have to work hard with very few moments of relaxation for anybody (does the piano get any peace at all?) but the work gains in focus when all that extraneous support is removed. Beethoven made sure that his soloists got equal time in the limelight, even if their relative tasks vary in degrees of difficulty.

This was a thoroughly amiable reading, Selby firing on all cylinders but giving her colleagues space to shine and be heard.   Haveron pulled his weight in full orchestra passages and then lightened his attack for the solo violin flights.  The only problem I found with the cello line came at moments of high tessitura where Valve strained to maintain pitch, as in the first movement solo passages where the line moves into the treble clef and the cello is very exposed over a light piano accompaniment; rather puzzling as the problem emerged only fitfully during unaccompanied concerted trio passages.  Still, the occasional high A sounded strained.  The middle Larghetto, on the other hand, where most of the cello’s work lies in the upper clef, proved admirably even and well-pitched under Haveron’s benignly phrased upper part.

Still, it’s the polonaise-suggestive finale that raises the spirits and all executants worked to excellent effect throughout, Valve skittering through the semiquaver scales with plenty of push while Selby scampered across Beethoven’s busy demands with very few slips.  Above all, the trio gave full voice to the whole concerto’s benign expansiveness, a pre-Schubertian sunny quality that impresses in the substantial opening Allegro which makes its composer’s mind-set clear from the opening four-square bars but then travels through page after page of modulatory disquisitions, in no hurry to come back to the argument but just relishing the journey.

In realizing this unstudied, almost relaxed emotional fabric, Selby and her two friends made this a refreshing experience, a surprise for many in the audience, I would have thought, given the dead silence that obtained after the first movement’s final chord – as if people were dumbfounded by the concerto’s obviously-stated contented benevolence. Yes, the commentators decry the unadventurous nature of this score’s material and its garrulous outer movements, but for all that you come away from it lighter of spirit.  And when it’s finely accomplished, as on this night, you’re not only mentally elevated but also grateful.   Mind you, for all Reinecke’s craft, it would be an even more gratifying experience to hear these players work through the piece with its original underpinning.