When concert halls were closed down in March Sydney pianist Kathryn Selby had to think outside the square to keep her customers satisfied. 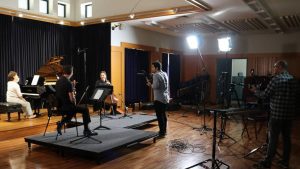 Live music has been my safety valve since childhood and in these days of COVID-19 the only performances I have heard have been the Sunday recitals from the rooftop of an apartment block opposite the Kings Cross fountain by a tenor and soprano singing Andrew Lloyd Webber favourites.

Wonderful, moving and welcome as these little live sound bites have been they have done little to fill the yawning gap since the closure of concert halls, so it was with some excitement that I logged on to the Selby & Friends website to listen to Kathryn Selby’s live performance of three works with Sydney Symphony’s concertmaster Andrew Haveron and cello co-principal Umberto Clerici.

The concert, Let’s Get Personal, is the second of Selby & Friends’ 2020 season and was to have featured New Zealand Symphony Orchestra concertmaster Vesa-Matti Leppanen, but he had to cancel because of travel restrictions and Haveron stepped in at the last minute.

Two days of intensive rehearsal at Sydney Grammar School followed and with a small change of program – two Sibelius works dropped in favour of Mozart’s Piano Trio No. 3 in B flat major K502 – the three musicians recorded the recital in a straight through performance with appropriate social distancing.

The result is chamber music of a quality of the highest quality. Let’s not forget that Haveron, although best known to us as a concertmaster, was lead violin for the renowned Brodsky Quartet for a number of years.

Of course, nothing can replace a live performance, and there are the drawbacks of occasional dropouts in these days of superheavy internet traffic, but Selby has come up with a neat solution.

The program shows how the unlikely combination of the three instruments developed over 100 years from Mozart to Beethoven through to Dvorak’s wonderful fourth trio, the Dumky.

It wouldn’t be a Selby concert without the chat from the musicians and subscribers get a full 45 minute “behind the scenes” discussion of the works and gain an interesting insight into interpretation and how to balance their quieter string instruments, both made in Milan in Mozart’s time, with a modern concert grand piano, in this case a Shigeru Kawai.

The Mozart work was written in 1786, a particularly fertile time for the composer with the Prague Symphony and Marriage of Figaro all being produced in the same year. Already the cello is becoming an individual voice rather than an accompaniment to the piano’s left hand, but this is definitely a showcase for the keyboard.

Beethoven’s Op 1 No. 1 – his first published work – is a gem and it promises of greater things to come with the Ghost and Archduke.

By the time Dvorak was writing chamber music the cello was very much a star. Clerici says that when he was a student his teacher told him that the Dumky was Dvorak’s “other cello concerto” and he obviously relishes the exposure in this performance.

Selby & Friends’ next tour is in July with a program of works by Beethoven featuring Selby with violinist Harry Ward and cellist Timo-Veikko Valve. Find out more at selbyandfriends.com.au

Let’s hope the next one can be enjoyed in real time in a concert hall.

← A Tale of Two Cities Impressions of Beethoven →