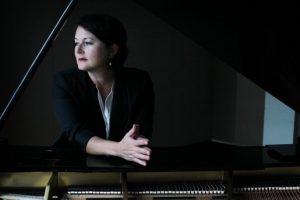 One of Australia’s leading virtuoso pianists, Kathryn Selby AM, will celebrate the 10th anniversary of her award-winning chamber music series Selby & Friends this year with a program of vibrant chamber music treats.

She’ll be joined for the opening leg of her 2016 tour in February by old friends violinist Andrew Haveron, Concert Master of the Sydney Symphony Orchestra, and cellist Timo-Veikko Valve from the Australian Chamber Orchestra. They’re just two of the renowned artists with whom Selby has worked over the last 10 years during her acclaimed career at the forefront of Australian music-making. Selby began the chamber music series to present high-quality performances in an atmosphere of warmth and familiarity, and glowing reviews accordingly have defined her performances as ones “to be treasured”. In 2011, Selby & Friends extended an invitation for audience members to bring children 14 years and under for free to develop the next generation of music lovers.

Selby says of the upcoming anniversary, “A decade is a significant milestone for an artistic venture in Australia. Selby & Friends was born out of my love for chamber music and my experience collaborating with many brilliant Australian and international guest artists, so it is fitting that in 2016 we celebrate that decade by highlighting extraordinary Australian musical talent.”

Kathryn Selby AM has been described as ‘Australia’s pre-eminent chamber music pianist’, having appeared as guest artist with the likes of the Australian Chamber Orchestra, the Boston Pops Orchestra and San Francisco Philharmonic. She earned her Master’s degree from the Juilliard School in New York and has since gone on to win prizes at the Van Cliburn Competitions, the William Kapell Competition and more. Her former piano trio, TRIOZ, was the first ensemble-in-residence at the City Recital Hall in Sydney, from 2008-2011.

London-born Andrew Haveron is currently Concertmaster of the Sydney Symphony Orchestra and has appeared with all the major symphony orchestras in the UK and around the world, including the BBC Symphony Orchestra and Academy of St Martin in the Fields.  He’s renowned for his work as first violinist of the Brodsky Quartet from 1999-2007, and he’s collaborated with the likes of Anne-Sofie van Otter, Elvis Costello and Sting.

Timo-Veikko Valve has been Principal Cello with the Australian Chamber Orchestra since 2006 and is one of the world’s most versatile musicians having appeared as soloist, chamber musician, orchestral leader and curator. Valve has also premiered concertos by Aulis Sallinen and Olli Virtaperko and is a founding member of Jousia Ensemble and Jousia Quartet.