TRANSFIGURED – Always a cut above 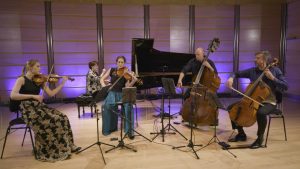 Back in pre-Plague days when musical organizations could safely plan a year in advance, Kathryn Selby mapped out her 2020 season, doing the right thing by balancing the popular with the should-be-popular.   For the August/September program, she was to begin each night with Mozart’s last piano trio, the K. 564 in G Major.  Then, in line with the program’s title – A Night Transfigured – we were to hear Schönberg’s sextet Verklärte Nacht in the piano trio arrangement by Edward Steuermann.   Finally came that old favourite, Schubert in B flat D.898.   Guests for the event were violinist Natalie Chee and cellist Julian Smiles.

Bending to necessity, the format had to change pretty substantially for the studio-broadcast situation that is now the only way to keep professional music practice alive.  Smiles remained on board, but Grace Clifford substituted for Chee in the Mozart trio, which survived into the modified program.   Out went the Schönberg; in came the final Brahms piano quartet, No. 3 in C minor where Selby, Clifford and Smiles were partnered by violist Stefanie Farrands.   And the Schubert work changed from that expansive piano trio to the Trout Quintet in A Major, for which the Australian Chamber Orchestra’s long-time bass player Maxime Bibeau came into the party.

Selby’s keyboard work in the Mozart set a high standard by its pellucid attack on the 8-bar first theme of the opening Allegro.  Clifford achieved a similar clarity but her style of delivery presented as cautious across the first pages.   As with more Mozart works than you can count, the development was over before you had time to take it in, but we eventually heard Smiles in a solo at bar 98, revisiting material that belonged to the upper string voice further back (bar 22).   Still,  Selby took parting honours with three flawless trills on the last line.

The second movement series of variations found Clifford weaving a highly sympathetic line for the first; Smiles showed himself as carefully supple as ever throughout No. II with a nicely judged hesitation on the A flat highlight in bar 13; Selby made herself a presence in Variation III but Clifford shone out without having to force her tone.   Selby scored again in the next sequence,  her elegantly formed phrases enjoying cadential commentary from the string duo – a process that continued in the minore Variation V.  The piano finally yielded place again to Clifford in the last segment, Selby muffling her demi-semiquavers yet keeping their flow discernible, not reduced to an impressionistic mumble.  And I don’t think you could have wanted a gentler coda, Clifford taking on the passage-work with suitable reserve.

Again, you could not fault the Allegretto/Rondo‘s initial statement from Selby: a clean pair of heels shown, without any vulgarity in the skipping 6/8 melody.   Clifford found a welcome force in her leading statements at bars 61 and 117.   Another pleasure came from Selby’s clipped gruppetti from bars 72 to 83, carried off with no sign of strain.   Just before the end, Clifford and Smiles produced a lyrically melting moment between bars 133 and 137 – the ideal lead-in to Mozart’s heartbreakingly optimistic conclusion.   In sum, an excellent rendering of this poised masterpiece.

A sombre build-up in the Brahms’ Allegro non troppo eventually exploded at bar 31 in typical defiance, but nothing thrashed out excessively.  Still, I relished the determination of the ensemble in their surge and ebb up to the magnificent E flat resolution at bar 102.  Throughout, the players had the measure of the score, displaying many heartening passages of execution, like Smiles’ impeccable phrasing in the descent at bar 142, and Bramble’s full-bodied lower voice in collaboration with Clifford immediately after.  But then, Farrands is a fine violist with an unwavering sense of pitch; as proof, you only had to hear her substantial solo arc from bar 252 onward: a true and individual voice which matched her violin companion in sheer sweetness of timbre.  Then, after the stress came a moving conclusion with fine growling from all three strings across the last three bars.

As in the Mozart first movement, Selby excelled in the quartet’s Scherzo/Allegro, combining impulsiveness with firm security of accents, on the beat and off.   The upper strings made an ideal match in an octave duet starting at bar 72.   Actually, while you take Selby as a given positive factor in music of this nature, you were hard pressed to find the other quartet members wanting, particularly in moments of dynamic crisis like the fortissimo leaps that begin at bar 54.   Yet again, the violin line could have contributed more prominently to the mix at the trio oases of bars 177 and 184; Selby, on the other hand, kept her power leashed at the string octaves leading to the weltering last measures.

The work’s Andante, its splendid core, opened with a well-rounded line from Smiles that remained present even when Clifford took the tune over.   My score has a molto dolce direction for all three strings starting at bar 34/35, and all responded sensitively, treading light paths up to the melting sixths beginning at bar 54.   Farrands gave way to Clifford at bars 70 and 75 in a telling instance of a musician knowing her place despite the inciting availability of double-stops.   Even better came at bar 94 which begins the unequalled pathos of this movement’s ending, these performers observing a breathless deceleration at bar 119, the instrumental mix balanced to an ideal degree.

After this, it might have been too much to expect an equally effective Allegro commodo finale.   From the beginning, Clifford had trouble projecting, to the point where her line seemed too wispy a creature at bar 21, then underplaying her soprano role at the chorale interludes beginning at bar 75.   Selby maintained her clarity of output in the piano’s rhythmic ducks and drakes, especially when Brahms began his galumphing two sets of triplet crotchets across the bar.   Shine-out moments came in a violin/cello duet at bar 270 where Smiles and Clifford merged to telling effect for 12 ardent measures; then, another  – almost a long-anticipated relief – when Selby thundered out the chorale at bar 311; and finally, Smiles’ grinding sustained low C from bar 351 to the positive last chords.

I’ve rarely come across this work in live performance.  But the same could be said for most piano quartets, probably because it’s hard to assemble four players with enough interpretative synchronicity to do such scores justice.   So this drama-packed Brahms made an excellent replacement for the Schönberg sextet arrangement, not least because its finale brought to mind that of Mendelssohn’s compelling C minor Piano Trio, although the later composition hid its seams more competently.

Schubert’s quintet, on the other hand, attracts musicians despite its odd instrumentation and resultant problems of balance.   It always brings about a strange relief when the main body of the first Allegro vivace gets under way at  bar 25 and you can settle down to revel in the composer’s benevolent melodies and watch the players’ collaborating in a work that is so formally straightforward and clear-speaking.   Viola and cello emitted delicate triplets from bar 38, leaving the foreground to violin and piano before subsuming everyone into their pattern.   Indeed, this work suited Clifford very well, allowing her trademark clarity and elegance plenty of scope.

You wanted balance and equanimity?  You had instances galore, one of the best emerging from the company at bar 93 after one of Selby’s  pointed solos.   When Bibeau got his six-measure exposure at bar 165, what you noticed was the evenness of his delivery – a melody, rather than a special effect.   Later at bar 260, violin and cello canoned efficiently while the supporting trio kept their station without moving in on the important interplay.  And the ensemble’s precision of delivery in Schubert’s brilliantly contrived dynamic about-turns and gripping drive, even across rests, made for a well-accomplished resolution to this (for some of us) not-quite-long-enough movement, even with a repeated exposition.

Still moving on a different plane to other chamber music we’ve heard in the lockdowns and population embargoes so far, Selby and her colleagues took us through a splendidly shaped Andante, the only question concerning pause-emphases on the initial fp notes in bars 19 to 22 which added punctuation, certainly, but made too much of slight harmonic changes.   Another sample of first-rate ensemble stood out between bars 36 and 60 where the even delivery from all participants demonstrated how to achieve Schubert’s mix of light rhythmic snap and throwaway melody.  As in the Mozart trio, Selby’s disciplined trills proved a delight, and the viola cello duet in thirds from bar 84 took us to one of the evening’s high-points for its probity of articulation and dynamic synchronicity.

The group’s output could have endured more forwardness from the top two lines at the Scherzo‘s opening, although the lines proved to be better balanced the further along the movement ran.   Fortunately, the Trio was consistent throughout: a brilliant interplay of texture, dynamic and attack.   A particularly effective patch of play came with the fiedel texture produced by Clifford and Farrands in exposed breaks such as between bars 59 and 62 – bringing the country to the city in the nicest way.

So we arrived at the eponymous song with variations.   The opening gambit for strings alone came across with a suitably placid charm, avoiding any over-insertion of swooping mid-phrase crescendi.  By Variation II, Clifford was well played-in, giving us an attractive and pliant decorative upper line; Selby delivered an object lesson in phrasing during the next segment where the keyboard dominates.   Again, the ensemble work shone in Variation IV, everybody tailoring themselves for that initial group of fortissimo four bars and the subsequent sinking back to soft duets and imitations.  Smiles in the tenor clef produced a well-honed hauptstimme in the next strophe of 27 bars before we arrived at the lied proper with Selby reassuring us that we were home and hosed with the familiar accompaniment while Clifford and Smiles shared the – finally – jaunty melody en clair before that throat-catching, simply put final four bars.

As with the preceding four movements, the Allegro giusto finale seemed packed with well-graduated passages, like the expert softening of texture from bars 61 to 78: not particularly inspired material but these people made a gift out of slim materials.   Still, this movement is a driving one, constantly coming back to the initial violin/viola opening theme and the composer happy to offer a repetition as an alternative to formal development.  By the way, most ensembles leave out the first half’s repetition; it might be a minority opinion but I would have welcomed hearing those pages again, given the ebullience of this reading which entered unstintingly into the underlying build-up/release pattern of these pages.

This mobile movement kept you on the edge of your seat, involved with the process despite the ‘heavenly length’ of its precedents.   As a whole, the performance projected a wealth of positive elements, realising the score’s underpinning glories: a melodic brilliance exceptional even for Schubert, rhythmic juxtapositions of remarkable fluency, subtle dynamic development to soften the edges, and an unflinching assurance of language across leisurely paragraphs.  Nevertheless, despite the elevated quality of this quintet, the Brahms work proved to be the program’s focus, mainly for its emotional consistency, no matter how tragic the composer’s world-view during its gestation.