American writer and biographer Catherine Drinker Bowen defined chamber music as “a conversation between friends” and it is the intimacy and immediacy of the genre that either makes or breaks a performance. Kathryn Selby has a gift for creating the ideal kind of ensemble described by Bowen, as well as taking care of the audiences she has nurtured throughout her career, so that we, as listeners, are partners in the musical conversations she enables. 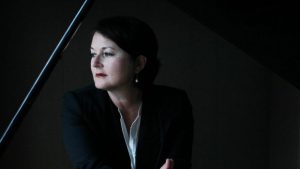 Daniel Dodds, violin, and Timo-Veikko Valve, cello, joined Selby to summon Beethoven to the stage. The opening work was the Piano Trio in B-flat major composed in 1797 in three carefully counter-balanced movements. In the first movement – Allegro con brio – the precision of the unison passages was matched by the delicate interplay of violin and cello with the piano offering subtle colour and unobtrusive rhythmic stability. The cello set the mood for the Adagio with a sonorous theme then articulated by the violin deepening a mood of equanimity, leading into the finale – Tema con variazioni – in which the strings created a transparent web above Mozartian piano cadenzas.

Lyrical as the Opus 11 was, there was a sense that it was restrained from flying by its form. Not so the Piano Trio in C Minor, Op. 1, No. 3, which perversely was written earlier than Op. 11 (between 1793-5). It is a work in which the compositional structure cleverly creates “windows” featuring a soloist framed by the two other players. The effect of each exquisite solo was magically enhanced by the clever illusion of reflections created in the accompanying instruments. An intrinsic rhythmic pulse maintained the sense of the music as a living creature, the strings drawing long breaths in the Andante, culminating in a ferocious all-in Finale. Prestissimo.

Quite clearly, the joyful exuberance of musicians in the Piano Trio in D major was shared by the audience. Beethoven is possibly the most successful composer at converting larger symphonic works to small ensemble settings – and his transcription of the Symphony No. 2 is dazzling. What I can only describe as an exhilarating “groove” had the audience moving visibly in the Allegro con brio following the opening Adagio-molto. Selby’s treatment of the demanding piano part was literally breathtaking, as there was little recovery time before each successively demanding “heroic” passage.

What better way to begin the week than to fill the senses with the passionate music of Beethoven performed by a trio who bring the composer to life through their musical conversations?