Kathryn Selby has spent more than 30 years of her life performing, and generously shares her wisdom and experience with young musicians looking to make their first big break. The pianist and founder of Selby & Friends works with emerging artists to offer them the experiences of making music in a professional setting (most recently, Kathryn recruited Grace Clifford to her performance series and you can read about this teenaged violinist in our interview).

For her efforts in Australia’s classical music scene, Kathryn has received Churchill and Australia Council fellowships, won global competitions and was appointed a Member of the Order of Australia in 2013. She’s shared the stage with the American Chamber Orchestra, Boston Pops Orchestra, San Francisco Philharmonic and most major symphony orchestras in Australia.

But she had to start somewhere – and for Kathryn it was in piano studies at the Sydney Conservatorium of Music before earning her Master’s at the Juilliard School.

You’ve had three decades of performing music in Australia. During this time, what have you found to be the most major changes to the classical music scene?

I would say that what has changed most is the inventiveness and creativity of many musicians to create new avenues for themselves outside the tried and true traditional routes. This is very exciting and bodes well for the future.

What was it like for you when you were first starting out as a young pianist?

I had a lot of encouragement as a young pianist – I won a lot of awards and had a lot of attention, which allowed me to study with some wonderful people here in Australia and then to head overseas to the United States and United Kingdom to study there and learn as much as possible. Because of all the encouragement I received, I think I was extremely fortunate. It wasn’t until I got to the US that I realised I was joining a very large group of amazing musicians with whom I would have to compete for a place in the hierarchy. This was also a good learning experience and taught me a lot about myself and what I actually wanted for my career.

When was your first big break?

I had lots of breaks but I suppose getting a New York agent was an important one. Winning prizes in competitions on the international arena were others. All of these put together created opportunities for me.

Were there any opportunities you had to turn down that you regret – or that made you feel proud to have said ‘no’?

No not really, except there was one offer I received to go to Italy when I was in my late teens for a few concerts, and in the end it was cancelled. That one I was very sorry about!

What has been the biggest challenge of your career?

Becoming a mum and still having time to practice for hours each day so that I could still walk on stage with confidence.

Tell us all about what Selby & Friends means to you.

S&F has been part of my life for almost 30 years now. It began as a way to introduce music to children, and grew into a wonderful way to enjoy chamber music with many friends and colleagues over the years; as well as give opportunities to heaps of young people in the industry – not just performers, but those who are heading into management and marketing.

Founding and running the business has taught me a great deal about what one needs to know to create a place for yourself in the music industry; things one doesn’t learn at music school. It has introduced me to some incredible people, and music, that I would not otherwise have known. It means a great deal to me!

You’re now working with young musicians in Selby & Friends. Why is this of value to you?

It’s an incredibly joyous thing to work with talented young musicians who are dedicated, disciplined, and determined. They bring a great deal to rehearsals and performances and masterclasses. I believe in passing on what I have learned. It’s as simple as that.

How do you see yourself in the young musicians of today?

I felt the same way and followed my own path as they will do, too. There is, however, much more opportunity available nowadays, I believe, than when I was their age, which is incredibly encouraging.

Why is it important for us to support young artists entering their careers?

It is not an easy career path to choose – one must have enormous emotional and financial help if at all possible.

What’s the biggest piece of advice you have to offer a young musician?

Find a teacher you have great chemistry with in order to study with them. If you do not respect them, it is not possible to learn as much as possible from them. If they have a big name but you do not get on with them as human being to human being, then you will not learn effectively from them. 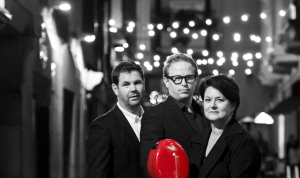